It occurs to me that my history classes failed me. They gave me an unrealistic conception of war.

The textbooks made it seem like various events and tensions built up over time, and most everyone knew a battle would break out sooner or later, but there always seemed to be a lot of preparation, mustering of troops and equipment, perhaps a long march up to a fortress, an ultimatum delivered along with a wax-sealed scroll reading, “Ready yourselves, gents, for the battle shall commence at dawn!”

They don’t tell you that, more often than not, attacks come at you out of nowhere.

Take my case last Friday morning. The weather was pleasant, overcast and in the 70s. I walked out of the front door reveling in this heavenly autumnal weather after having just survived yet another brutal, molten South Carolina summer. It also happened to be Friday, the second best day ever invented (after Saturday), so I wasn’t so much walking down my front stairs as I was floating down them.

Then I reached the landing and felt my left elbow become entangled in a web. I flashed back to a few days prior, when my husband discovered a spider living in his pepper plant. I remembered how he gently moved the web to the side so he could pass. I commenced freaking out. High-pitched yelp, arm swats, jumps backward. It was almost like it was canker worm season all over again.

Thankfully, I saw the little guy running away from me, so I calmed myself down knowing that he wasn’t making his way down my shirt, and beat a hasty retreat to my car.

Later, I came home from work carrying a bag of groceries and a coffee to see one of Mother Nature’s most breathtaking phenomena:

Okay, make that a Mother Modcloth phenomenon. I’d be lying if I said this type of occurrence is rare at my home, but regardless, it never fails to make my heart skip a beat.

I rushed up, key at the ready. I opened the storm door and boom. Phase II of the attack was launched with no warning. A giant hairy spider dropped down and would surely have landed squarely on the hand of someone without my catlike reflexes and deep terror of insects and arachnids.

This was like the enormous great grandmamma of the little fellow whose web I’d mangled in the morning. But this time, she was at my front door. Centimeters away from getting inside.

She stared at me belligerently from her perch, wedged into a crack in the siding by the doorbell. 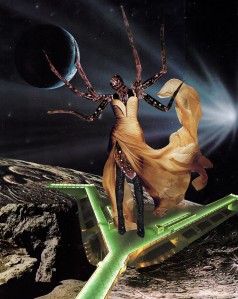 Slowly I lowered my groceries and coffee to the ground, never taking my eyes off the potential intruder. I picked up my Modcloth box, fully aware that it had just become the only thing standing between me and certain death.

With the precision of a master swordsman, I jabbed at the beast with the box’s corner. She feinted left. I parried forcefully again, to no avail. She disappeared behind the siding and I ran inside for cover. Spiders: 2, Maria: 0. But at least I still had my life, if not the corpses of my enemies.

I went inside and began putting away groceries, having shifted my focus off the spider and back to excitement over the contents of the package.

I went to throw away some trash and there it was. The third phase of the attack. Another little minion spider jumped down beside the trash can.

Spiders outside the house are one thing. They serve a role in the circle of life and eat insects and all of those noble, worthwhile things. But I have claimed this small piece of space and have a zero tolerance policy for bugs of any kind within its walls. 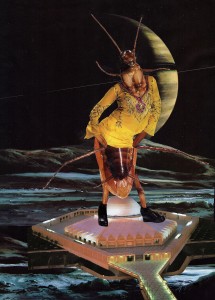 I didn’t hesitate. I armed myself with a paper towel even before I could get out the, “Hell no,” that formed on my lips. I started pulling the trash and recycling cans away from the wall to flush out the attacker.

I smacked at him, but he dodged and saved himself. Then my true banshee warrior awoke and I struck over and over, unrelenting, until the monster finally yielded to my deadly two-ply paper towel of death.

Creepy crawling things, beware. You have a whole beautiful world out there to explore and enjoy. But if you should stumble across a second story condo with a fox doormat and bunny doorknocker, read them as the omens of impending doom that they are, and fall back. For you are not welcome here, and if you dare to cross this threshold, you may find yourself crushed beneath a paper towel, or maybe it will be a cute shoe or a magazine or even a cat’s paw, but whatever weapon is employed, the end result will be the same. No prisoners shall be taken, and nothing but ruthless death awaits ye here.

Consider that my wax-sealed scroll of warning.