By the time I reached 17 years of age, I knew everything. If you don’t believe me, you should build a time machine, go back to 1990, quiz me, and prepare to be amazed. The things knew back then include (but aren’t limited to):

To be honest, I can’t even remember having forgotten most of the things I used to know. Over the years, so slowly I didn’t even realize it was happening, one fact after another got wiped out of my brain without so much as an Are you sure you want to delete this file? dialog box.

As time passed and I traveled to different places and tried new and exotic things (like ranch dressing), many of the opinions I once held so adamantly (like salad dressing is disgusting) disappeared. Each instance when I was forced to interact with and learn about other people eroded away at my confidence that I was always right. My ability to quickly and harshly judge other people took some heavy hits in my 30s, after suffering the consequences of having made more than my fair share of terrible life choices. By the time I hit 40, my certainty that I had superior judgment than all the rest of y’all was a barely imperceptible shadow of what it had once been.

Case in point: as a young pup, I was convinced that people who owned pajamas were fools. Why would anyone spend money on articles of clothing no one except maybe their spouse would ever see? Why not just sleep in a big T shirt and maybe some sweat pants? Nothing but the brainwashing of ad writers and wasteful, decadent consumerism could motivate someone—who most certainly already owned plenty of clothes—to buy additional pieces of clothing for the sole purpose of wearing while unconscious and alone.

Well, here’s another one to add to the L column, because I have utterly and irrevocably lost my disdain for pajamas. And I can tell I’m getting older, because it’s getting worse. In the last couple weeks, I’ve spent more money on pajamas than I spent acquiring an entire wardrobe from Goodwill in 1995, the year I graduated college, started working as a temporary secretary, and realized I didn’t own a single office-appropriate outfit.

Yes, I’ve become the kind of person I once abhorred. For me, at least, this seems to be a central theme of growing up.

But there’s a lot I didn’t understand about pajamas when I was a know-it-all teenager: how some types are good for sleeping, others for lounging on the porch on a crisp morning as you sip your coffee and ease into your Saturday, and others for changing into immediately after work when you, at last, get to sit on the couch, watch your favorite show, and enjoy a supper of moscato and puffy Cheetos.

Because you know what? Those are the moments you end up living for as an adult. In high school, when you envisioned your future, it was full of meaning and fulfillment and importance, grand adventures, and fairy tale endings. You were going to run away with the circus, or become a superstar athlete, or a rockstar, or a ballerina. You were going to climb the highest mountain, write the great American novel, solve world hunger, and never say to your kids any of those irritating things your parents said to you. And you were going to do it all in a smartly tailored suit or billowy evening gown.

But your life turned out nothing like that. By the time you get to Friday, your job has you feeling like: 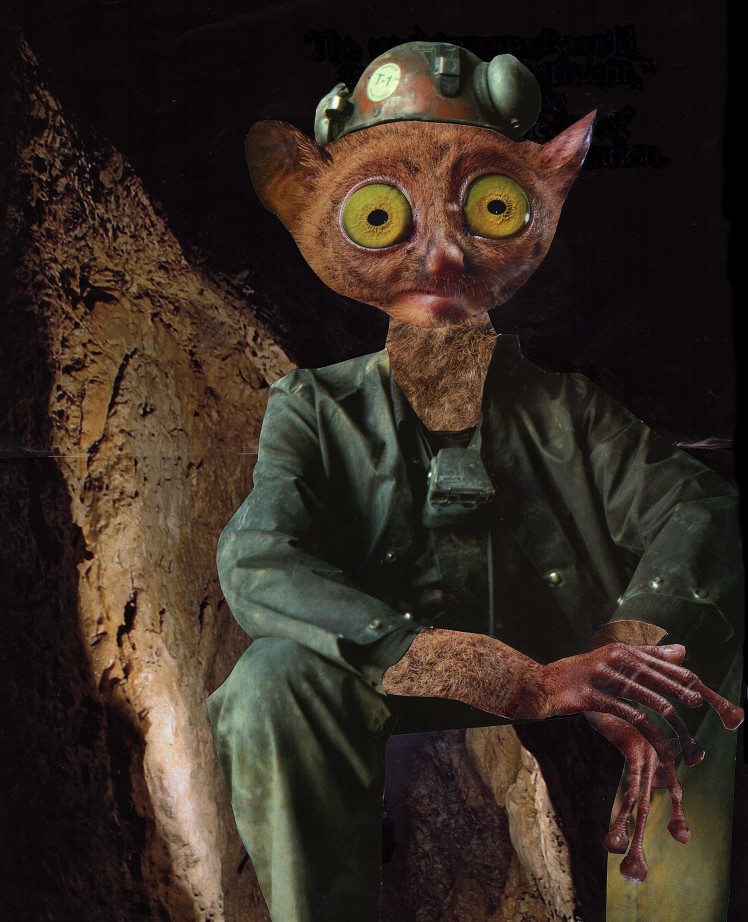 Or even if I’m wrong, even if some of those dreams came true for you, they all involve a lot of hard work and suffering. You know what doesn’t? Hanging out at home with your beloved, your trusty pet curled up beside you, when you’ve got nowhere you have to be and nothing pressing you have to do, fuzzy slippers on and bra off.

You know what makes those times even better? PJs made out of this postmodern, magical modal cotton they’re making now that’s so soft, the sensation of it caressing your skin releases exactly the same number of endorphins that would flood your system if you were to pet a dozen baby pandas.

Now, if you don’t live within easy traveling distance of a Target, or you don’t have $15 to $25 to spare right now, or you live in a tiny home and have reached your maximum clothing storage capacity, you might want to click away now. Because the pajamas I’m about to show you…once you see them, you can’t unsee them. You’re going to feel deeply compelled to go buy them immediately. Even if you’re somehow able to resist, you’ll wake up tomorrow thinking about them, and the next day, and the next, until you finally give in and your newly-wakened thirst is quenched. 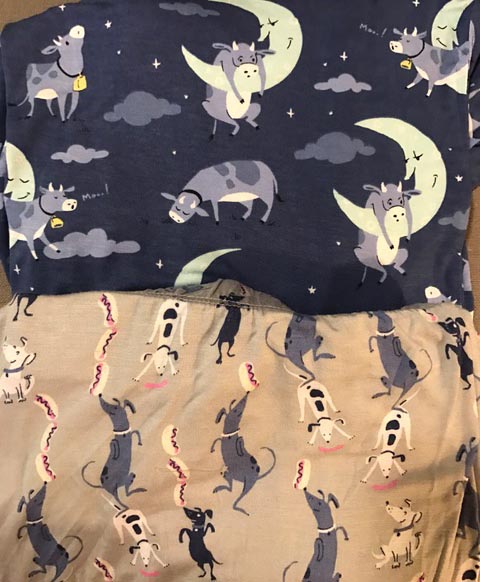 PJ score after third Target trip (for the record, the cow who didn’t quite make it over the moon is my spirit animal)

PJs I haven’t yet bought because this a romper, and as a woman who is both tall and sane, I am deeply opposed to rompers, but that I probably eventually will buy because: goggle-wearing giraffes on Vespas

I ask you: if I didn’t use my hard-earned money to support and reward the kind of people who put cat astronauts, coffee-drinking bears, pizza-stealing raccoons, hot-dog-balancing wiener dogs, and baguette-fetching French bulldogs on pajamas, what kind of monster would that make me? These are the people doing important things in the world today and I, for one, am glad to support their noble efforts.

So screw you, 17-year-old Maria. I have half of a dresser drawer dedicated to pajamas, and I don’t care what you think about that. You’re not the boss of me. Go to your room and get back to studying for that AP exam that resulted in a few hours of general college credit that didn’t apply to your major and did nothing to shorten your time-to-degree. I have some squirrels-stuffed-with-acorns PJ pants and a bag of Cheetos calling my name.